On the heels of an event-filled Canada 150, we’re expecting to return our focus in 2018 to the fort’s core missions. Our calendar is still full, though, and we were off to a busy start with the opening of the Bentway’s skating trail on January 6 and the Mayor’s Skating Party the next day. The circuit certainly did what we expected it would in bringing hundreds of people down to Fort York from early in January to mid-March.

As a result of free admission during the opening weekend, we had an extra busy time in the fort itself. The same occurred during Family Day, with over 1200 visitors taking advantage of free admission to the site. As we continue to work with The Bentway Conservancy, we’ll develop an approach that encourages more of the same. With the skating season finished, efforts have returned to completing construction on the remainder of the first phase of the Bentway. For more on the Conservancy, visit www.thebentway.ca.

More than 260 people visited Fort York on February 11 as we hosted a Sofar Sound pop-up show featuring Indigenous throat-boxer Nelson Tagoona, Juno-nominated Beny Esguerra, and local band Little Coyote. And on February 24 more than 100 people attended Hungry for Comfort: A Celebration of Canadian Food History. In what we intend to make an annual event, the day-long program supported by Redpath Sugar featured panel discussions, workshops, cooking demonstrations and a 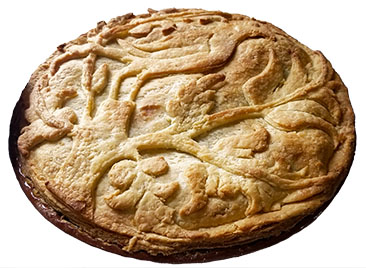 A Florendine of Oranges and Apples, by Mya Sangster, a Redpath First Place at Hungry for Comfort. Photo: Melissa Benyon catered lunch. Historic foodways of the French, English, Indigenous and Metis communities were all well represented; for a complete report, see the story from Melissa Beynon. Thank you to Bridget Wranich and all of our wonderful volunteers and partners who came together to make this event the success that it was.

Recently installed in the Brick Magazine are 21 images from the more than 30,000 photographs by Arthur Goss in the City of Toronto Archives collections. The photographs depict various aspects of Fort York’s conversion from an active military establishment to a public museum in the early 1930s. Thanks to staff on-site and to the Collections and Conservation staff at Atlantic Avenue, Christophe Jivraj in particular, for making this happen in such short order.

As a staffing update, we’re pleased to announce that Erica Roppolo will be joining the Fort York team as our permanent Museum Outreach Officer. Erica has been acting in the position for the past year and has previous experience as a Support Assistant and Museum Attendant at six of our Toronto History Museums. She has also worked with Nuit Blanche, the Luminato Festival and TIFF. Among those who’ve been here for years, quietly making the place better, volunteer cooks John Hammond, Sherry Murphy and Ellen Johnstone have been honoured by Queen’s Park for their dedication to Fort York’s culinary history (there’s a picture nearby). Congratulations, and thank you for all 15 years!

On the construction front, we’ll be pleased to see the first phase of the Bentway wrap up in the next few months along our Fort York Boulevard frontage. The same can be said for Garrison Crossing (the Fort York pedestrian bridge), which will be completed this year. These projects will go a long way toward better connecting the fort with surrounding neighbourhood.

There’s good news and bad news to report regarding the fort’s east gate connection to Bathurst Street. While working to replace the concrete deck on the east gate ramp, engineers found that the supporting bridge piers were not stable and had to be demolished. Instead of getting into the major cost of total replacement, a decision was made to remove the ramp entirely. This will finally allow for the proper rehabilitation of the fort’s landscape and ramparts on that side. With the stairs at the south-west corner of Fort York Blvd and Bathurst, improved connections down through the library and into the coming Lower Garrison Creek Park, and from the west along a planned trail on the north side of the fort, the east gate will eventually be far more accessible than it has been for years.

The new pedestrian bridge to the east gate of the fort on June 17, 1931, in two views by Toronto official photographer Arthur Goss. They are in a new exhibition in the Brick Magazine of photographs by Goss documenting work done at the fort during the 1930s. Source: City of Toronto Archives