We’ve just wrapped up one of our busiest times of the year here at Fort York. We were booking school groups from far and wide even as we ramped up our largest events of the year.

In addition to our usual cross-section of school visits from the Toronto boards, Peel, York, Simcoe, Durham and the Bluewater District – and these are just the biggest – we set up tours for the men’s soccer team from Geneva College in Beaver Falls, Pennsylvania; a group from the University of Klagenfurt in Austria; and a school visit from the fly-in community of Kitchenuhmaykoosib Inninuwug First Nation (Big Trout First Nation). That’s an Oji-Cree First Nation reserve in Northwestern Ontario about 580 km north of Thunder Bay.

In May we were part of Jane’s Walks with our “Schooners to Skyscrapers” tour of the military, industrial and athletic history of the fort’s immediate neighbourhood; check Upcoming Events for opportunities to join this tour later in the summer. Some 3,000 participants landed at Fort York for the beginning of the annual Meagan’s Walk; our front door marked the end of the Sporting Life 10k Marathon on May 12; and on the following weekend fort staff led tours with a focus on Women in Fort York History to celebrate #WomenInCulture.

More than 2,800 people came here during Doors Open Toronto on May 25 and 26. We had displays, re-enactors and demonstrations from the present Canadian Army, our own staff and a host of historical organizations. Thanks to the Royal Canadian Horse Artillery (from Petawawa) and 7th Toronto Regiment, Royal Canadian Artillery (from Moss Park Armoury); the Limber Gunners Association; HMS Psyche Canadian Maritime Heritage Society; the 100th (Prince Regent’s County of Dublin) Regiment; the Canadian Regiment of Fencible Infantry; and the Upper Canada Living History Association. Also here was Trevor Parkins-Sciberras (check Transit Bricks online) who built an amazing Fort York entirely of Lego. You can see CP24’s story about him .

I’m happy to report that Fort York and many of the other City-operated museums have had a chance to put a new idea into play: we’ve been hosting “Newcomer” visits in partnership with the city’s Newcomer Office. In a program to help improve their settlement, TTC tokens and free admission are offered to recently arrived immigrants to bring them into not just the city’s museums but Toronto’s present culture. The experience was the result of a generous sponsorship from Meridian. We hope to make this a regular program at Fort York, and thank Meridian again for their generous support.

We also helped The Bentway with Noemie Lafrance’s production of the contemporary dance piece Derives, which was workshopped at Fort York in the spring and performed in front of our Visitor Centre (largely on the Wharf) June 5-8. More than 1,200 people saw the show. We’re also an important venue of The Bentway’s New Monuments for New Cities project, which was launched on May 11 in co-operation with New York’s High Line Network. The art will be in place until the end of August.

Fort York’s popularity with the directors of feature film and television is continuing. Episodes of The Handmaid’s Tale were filmed amid the award-winning architecture of the Visitor Centre in early May. Titans is filming Season 3 in Toronto and will feature a scene under the Gardiner at the Visitor Centre. Shooting for that was at the end of May. And Shazam! was partly filmed at Fort York last year; look for the big scene with the bus. 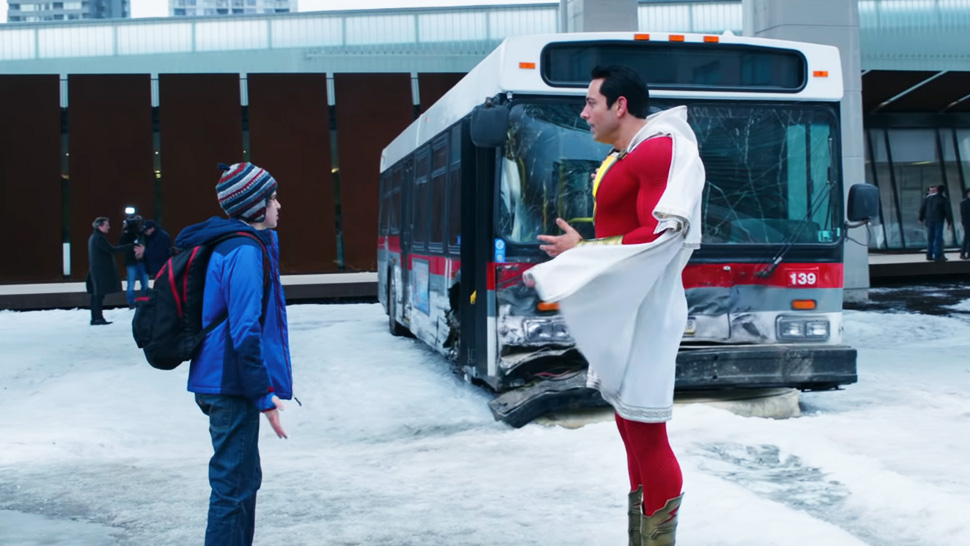 The stars of Shazam! are seen in front of the Fort York Visitor Centre during filming in March 2018. Starring Asher Angel and Zachary Levi, the film is part of the DC Comics series. Photo courtesy Warner Brothers.Dubbed “the ultimate cottage-in-the-city experience,” Spring Beerfest TO returned to Garrison Common on Saturday and Sunday of the Victoria Day weekend. More than 3,000 people enjoyed a wide selection of Ontario craft beers and great food, outdoor games and music (even as they unfurled their umbrellas).

During the last week of May we hosted a private event for the Royal Canadian Mint. As part of the launch of the mint’s D-Day 75th anniversary coin, fort staff explained displays of artifacts to put the commemoration into context. On the day of the invasion – June 6 – program officers Kevin Hebib and Bridget Wranich gave a great illustrated lecture for members of the public on the food of the troops in Normandy. The evening was enhanced by a delicious selection of period baking.

More than 250 people came to the movies at Fort York in the middle of June for screenings of Thelma and Louise (on Saturday night) and Misery (on Sunday). It was the opening weekend of the Toronto Outdoor Picture Show series – TOPS – happening in parks around the downtown; find the schedule here.

The opening of Garrison Crossing, the bicycle and pedestrian connection over the rail corridors, has been delayed again. The final link – across the tip of the Ordnance Triangle – is now promised for late summer. The graceful landing of the bridge onto the north bank of Garrison Common is essentially finished. The reconstruction of Garrison Road, turning off Fleet Street and north past the armoury, is actually finished.

There’s also a new trail there and a more sustainable landscape. It’s the result of the fort’s own staff working with Waterfront Toronto to prepare a better connection from Garrison Crossing through Fort York National Historical Site (and intersecting The Bentway) south to the water’s edge and the Martin Goodman Trail. Below the north side of the fort, meanwhile, a 600-metre stretch of multi-use trail in the lowlands is also essentially finished. It’s the future link under Bathurst to the coming Lower Garrison Creek Park and the towers of CityPlace beyond.

Finally, Fort York’s seventh annual Indigenous Arts Festival ran from Tuesday, June 18 to Sunday, June 23. We saw about 700 people a day throughout the week and then almost 3,000 more for National Indigenous Peoples Day on June 21. The day began with Chief Laforme of the Mississaugas of the Credit raising their flag at the fort and launching the Moccasin Identifier Project, which is designed  “to mark the traditional territory and enduring presence of Indigenous peoples. ” The entertainment that night included the Métis Jiggers, Fawn Big Canoe, Beatrice Deer and Quantum Tangle.

Saturday began with the Na Me Res Sunrise Ceremony and the Grand Entry for the big Pow Wow at noon. Joining us were the Minister of Crown-Indigenous Relations Carolyn Bennett, MPP Chris Glover, Councillors Cressy and Wong-Tam, and MoCFN Councillor Evan Sault. That night the stage on Garrison Common was lit up with Amanda Rheaume, Jah’kota and Midnight Shine.

A huge thank you is in order to our key partners: the Mississaugas of the Credit First Nation, Na Me Res, and the Native Canadian Centre of Toronto. The 2019 Festival Artistic Curator, Kim Wheatley (an Anishinaabe band member of Shawanaga First Nation) did a fantastic job and I can’t thank her enough. It was all made possible by the generous support of Tim Hortons (especially) and the Government of Canada, with sponsorships by CN, the OLG, Bell Canada and Stantec along with help from The Friends of Fort York and Garrison Common. With more than 20,000 people attending events of the 7th annual Indigenous Arts Festival, it was the largest yet seen, and proudly hosted by Fort York National Historic Site.