It has been another busy summer at Fort York. July kicked off as usual with Canada Day when the Fort York Summer Guard traditionally begin their demonstration season. What some of my friends still call Dominion Day 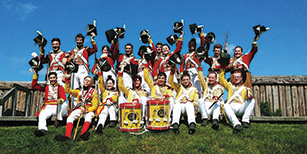 Troops and Drums of the Canadian Regiment of Fencible Infantry (that is, the Fort York Squad) celebrate their victory at Fort George on August 18, 2019. They emerged overall winners of the 20th anniversary Drum’s Muster & Soldiers’ Field Day. Tested were the skills of drilling, marching and firing – including an execution of “the perfect volley.” Also competing were two companies of the 41st Regiment from Fort George; elements of DeWatteville’s Regiment from Old Fort Erie; and elements of the 100th Regiment of Foot, based in Ottawa. The indomitable 10th Royal Veteran Battalion (alumni of the Fencibles, curmudgeons among them) provided experienced judges and what Parks Canada calls “demonstration programmers,” assigned to amuse a fickle public. Off duty, the veterans visited Niagara-on-the-Lake for refreshments. Photo by Lance Corporal Holly Benison was a huge success, with good weather and crowds to match. Considering the relatively tight turnaround for the new recruits, the Guard was up and running thanks to their NCOs and the efforts of our staff. All in all this made for a successful and safe demonstration season.

The highlight of the summer was Simcoe Day, when members of the Fort George Guard joined us to put on a spectacular show. The great weather helped to ensure record attendance. Well done to all the staff and volunteers! In particular, the careful and constant supervision by Kevin Hebib, Ewan Wardle, Colin Sedgwick-Pinn and Sam Horne was much appreciated.

Throughout the summer, the fort hosted many programs and activities – some familiar and some new. In particular, we offered the new Staycation Sunday events, free to the public with their admission. All of our people were involved in creating neighbourhood walking tours, an evening of campaign cooking, an entire day of historic music, the Great War Picnic event, and heritage garden and honey-making tours. Thanks to everyone here for making these happen; they introduced new people to the fort and gave us many ideas to work with. Summerlicious was also on the menu here this summer when Bridget Wranich and Melissa Beynon staged their Cool Tastings ice-cream workshop. Nothing tastes more like summer than the ginger ice cream made by the fort’s culinary historians!

Fort York and the open space of Garrison Common also hosted a series of third-party events: there was Vegandale, SOCA Brainwash, the Plantain festival, the musical happening called All Day I Dream, and the Caribbean-themed day called Flare. These events all diversify our audience and generate valuable revenue that helps sustain National Historic Site work. 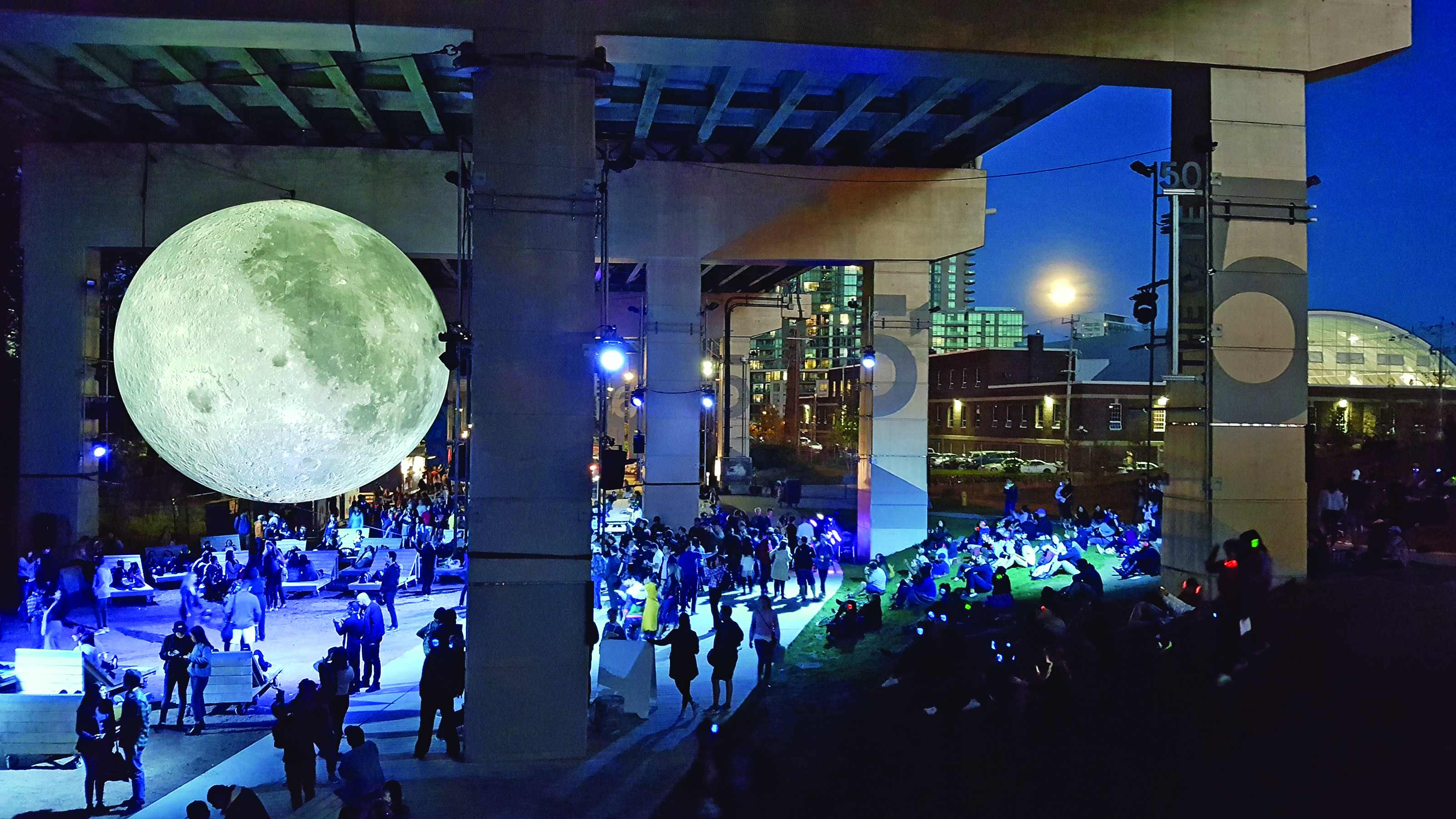 The Museum of the Moon hovered under the Gardiner for six days, drawing thousands toward her in a nightly tide that climaxed in the harvest moon of Saturday, September 14 (the moon can be seen in the photo rising over the armoury a few days before). The near illuminated sphere is a seven-metre sculpture by U.K. artist Luke Jerram. The Bentway buzzed with food, drink and glowing millenial headphones while films and lectures in astronomy – including on our own Captain Henry Lefroy, of magnetical fame – happened in the Fort York Visitor Centre. Under the full moon on Saturday, Laurie Brown (of Pondercast) and the electronic Julian Van Tassel assembled a podcast live with Bernice, Choir! Choir! Choir! and the Halifax innovator Rich Aucoin. Photo by Andrew StewartThe fort was also thoroughly involved with some Bentway initiatives this summer, notably the annual Block Party and their regular Sunday Socials. These were all well attended and brought many new faces down to the area. The highlight of the Bentway’s season came in mid-September: the Museum of the Moon, a spectacular installation that brought some 20,000 visitors down to the Strachan Gate.

And September was an usually busy month: even as the school year got underway, our staff was working hard on a butter-tart workshop, an entire weekend of expanded displays and events on the mobilization of the city in 1939, and on the final weekend, the new concept of The Big Draw – an international festival of en plein air artistry. The last grand event of the season was the experience of Nuit Blanche, on October 5 involving our entire 43-acre site.
As the days lengthen in October, here at the fort we begin looking forward to the coming seasons. Our popular and totally spooky Fort York After Dark lantern tours resume on October 28 – you need a ticket, so do make a reservation (see Upcoming Events for details). Our culinary historians, meanwhile, are planning their new series for children in December: there’s going to be gingerbread galore for the cook’s apprentice! 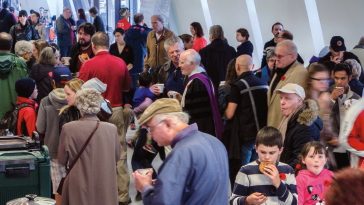 The Reverend Dr. John D. Hartley (1942-2019) in the midst of the reception following the fort’s Remembrance Day service in 2014. After a lifetime of service to the United Church, Dr. Hartley “drifted peacefully into the next life” (as his family put it) on February 3. He led the annual remembrance on Garrison Common for more than 20 years. Photo by Jean-Marc RobinFinally, as we approach another Remembrance Day, it would be remiss of me not to mention a very sad event. The Reverend Dr. John D. Hartley passed away in February. Many of you may know Dr. Hartley as the minister who presided over our Remembrance Day services, virtually uninterrupted, from 1992 until only recently. We had no idea he had been suffering from pancreatic cancer when he had to bow out of last year’s event. The last time I talked with him was a week before November 11 when he assured me that, if I could not find a replacement, he would not let me down. Dr. Hartley was a great servant of Fort York, a fine person and a perfect gentleman. He will be missed.

David O’Hara has a new job. Site Manager at Fort York NHS since the beginning of 2005, David has been at the centre of every big development since, including the restoration of Garrison Common’s landscape and the creation of the extraordinary Fort York Visitor Centre. His new role (still with the City) is overseeing the possibilities for Rail Deck Park. Above, he’s chatting with author Mike Filey on the 100th anniversary of Vimy Ridge; right, he and Richard Haynes – who took over as Acting Site Manager right after Labour Day – anticipate the arrival of Prince Andrew for the Invictus Games in September, 2017. Look for an appreciation of David’s lasting contribution to Fort York in the next Fife and Drum. Photos by (above) Kathy Mills and Bob Kennedy