Fort York was particularly busy in the autumn, starting with our excellent Second World War event, A City Mobilizes. The weekend was a great success thanks to the hard work of so many of our staff and the contributions of our partners. The public was treated to a great range of demonstrations, displays and activities.

This was closely followed by a new, museums-wide event called The Big Draw, an arts-based festival encouraging visitors to join classes and workshops and, most of all, make drawings of their own. Despite the terrible weather on the Saturday it was well attended and we are excited to see how it evolves in the future. I should mention that the fort also hosted the annual Get Loud, Sick Kids event at the same time, as well as an overnight program. Well done to everyone for making this happen, especially the part-time staff who support all the site’s programs so admirably. We couldn’t do all of this without such a dedicated team. 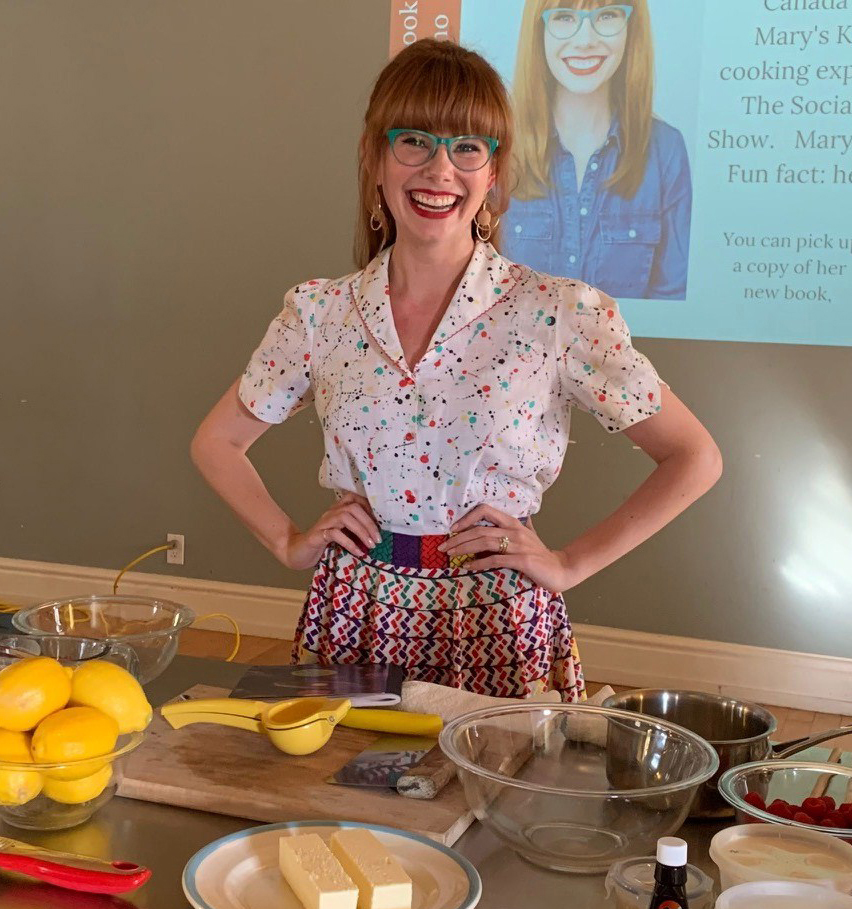 Chef Mary Berg is the author of the hot new cookbook Kitchen Party and star of the TV series Mary’s Kitchen Crush. She was among the highlights of the day-long Canada’s Table cookbook festival in October. Demonstrations and workshops filled much of the program but the Long Table Lunch – with settings by Nik Manojlovich – was a happening. Photos by Melissa Beynon.October was equally busy. Fort York National Historic Site was an important venue for Nuit Blanche this year. Multiple installations and activities attracted some 30,000 people to the area and one of the pieces, “Stronghold,” extended into the next week. The fort was a polling station for the federal election and there were also advance polls here over the Thanksgiving weekend. After voting, many people took the opportunity to see the displays of the Visitor Centre, a great way to highlight our museum to the immediate neighbourhood. Finally, our culinary historians hosted the Canada’s Table cookbook festival, a day-long event featuring a terrific luncheon and talks, demonstrations and prizes.

Our Remembrance Day service at the Strachan Avenue Military Burial Ground was also well attended despite the snow that seemed to add to the solemn nature of the ceremony. The Reverend Jan Hieminga returned to lead the prayers, adding his own poignant memories of being a small boy during the war in Holland, liberated in 1945 by Canadian soldiers. Robert Divito added his trumpet, as he has for many years, and we deeply appreciate his contribution. Many people took advantage of the new Garrison Crossing, which opened early in October. Among those laying wreaths were the IODE – co-sponsor of the ceremony – and the Toronto fire and police services, Canadian and British service personnel, and Spadina–Fort York MPP Chris Glover.

We were also at the Royal Agricultural Winter Fair this year, with Bridget Wranich and Melissa Beynon demonstrating our foodways history. And they did more than share great recipes: their wonderful Ginger Ice Cream was declared the Grand Champion of the first-ever Royal Ice Cream Competition! Well done to Fort York’s culinary historians! This was a great outreach opportunity as we continue to look for partners to help make Fort York more popular than ever.
We also hosted a couple of film shoots in the Visitor Centre in October and November, really helping us reach our revenue targets. We have also had a great season for school visits, seeing increased bookings for many of our tours and workshops. Throughout the winter we’ll be working on new programs, particularly in Indigenous themes.

There have also been improvements to the site during the last few months. You may have noticed the new roof on the South Soldiers’ Barracks, and we’ve been able to secure more funding for the roof of the East Brick Magazine – it’s much needed work! We are also making some technology upgrades, including laying fibre optic cabling from the Visitor Centre to the fort itself.

As we reach the end of another year, I would like to thank again all the staff and volunteers for their tremendous efforts on behalf of the fort. A great deal of hard work and dedication goes into this site and every one of the staff has a part to play. We have an amazing team and we could not succeed without them. I extend these thanks also to the many people in the organization who are not based at the fort but who work to ensure our success, whether it’s in maintenance, exhibit support, capital projects, information technology or human resources. And thanks have also been earned by the Friends of Fort York & Garrison Common, whose ongoing support makes a big difference to Fort York National Historic Site.

Finally, we said goodbye to a long-term member of the team in October. Melanie Garrison, the fort’s support assistant, retired on October 18 after just over 30 years with the City of Toronto. Melanie started at Fort York in the summer of 1989, only shortly before a number of us started ourselves. She moved on to work at the 311 office in 2009 but, luckily for us, came back six years later to finish up her journey with the City. We all wish Melanie a fantastic, well deserved retirement.