On August 15, the 200th anniversary of the great victory Brock

Seen following the Toronto ceremony are (l. to r.) Ted Opitz, MP- Etobicoke Centre, Sandra Shaul of Toronto’s Bicentennial Project staff, Mr. MacKay, City Councillor Paul Ainslie, and Kevin Hebib of Fort York. Credit: MCpl Dan Pop, DNDand his Native allies won over US forces at Detroit, the Hon. Peter MacKay, Minister of National Defence, came to Fort York to announce that the Government of Canada has awarded the battle honour DETROIT to six Reserve Regiments in southern Ontario. They will now be able to emblazon this honour on their regimental colours. Receiving the award were the 56th Field Artillery Regiment of Brantford; Queen’s York Rangers (1st American Regiment) of Toronto; Royal Canadian Regiment of Petawawa; Royal Hamilton Light Infantry of Hamilton; Lincoln and Welland Regiment of St. Catharines; and Essex and Kent Scottish of Windsor. As well, the honour was accorded to the Royal Newfoundland Regiment of St. John’s at a separate ceremony there. All units are successors to those who fought under General Brock and alongside Tecumseh.

On September 14 Mr. MacKay returned to Fort York to announce additional battle honours were being awarded to a wide number of regiments for QUEENSTON, MAUMEE, CHATEAUGUAY, CRYSLER’S FARM, NIAGARA, and the DEFENCE OF CANADA.

After more than three decades of planning and a tremendous amount of hard work, the construction of a new Visitor Centre at Fort York National Historic Site is finally about to begin this fall.

The building, designed by Patkau Architects Inc. of Vancouver with Kearns Mancini Architects Inc. of Toronto, and costing $18 M will be constructed under a contract between the City of Toronto and Harbridge + Cross,  a Canadian company with many years of experience and a wealth of industry expertise.

When complete, the Visitor Centre will house reception and visitor amenities, multimedia programming, exhibits, and facilities for education, research, and staff. Its completion will allow the fort’s administrative functions to be relocated from their present quarters within the historic structures inside the ramparts. The building, which won Canadian Architect magazine’s Award of Excellence in 2011, has been designed to reinterpret the original shoreline bluff along Lake Ontario and create a strong visual presence for the fort along the Fort York Boulevard frontage.

The whole project–construction and fixturing of the Visitor Centre, installation of exhibits, and landscaping of the surrounding Garrison Common–has been budgeted at $25 million. Of this some $19 million has been pledged by all three levels of government. The balance of $6 million will be raised from among private donors by the Fort York Foundation. For more information about the Foundation’s campaign, please visit www.fortyorkfoundation.ca.

The landscape master planning, working with landscape architects/urban designers DTAH, continues. This exercise will include the development of a detailed revitalization plan for the Garrison Common as well as a careful look at how some of the projects in areas adjacent the fort, such as the future construction of the Fort York pedestrian bridge and the reconstruction of the Bathurst Bridge, should be planned and designed to complement plans for the national historic site itself.  The very basic landscaping undertaken early in the year on the Garrison Common has already allowed for extensive use of the grounds throughout the 2012 season. The next major phases of landscape improvements to the Common and the rest of the area outside the fort’s west gates will be coordinated with the Visitor Centre construction and undertaken in 2013 and 2014. Advancing this critical landscape restoration project has only been made possible by a lead gift of $1 million from the W. Garfield Weston Foundation to the Fort York Foundation.

The landscape design work at the east end of the national historic site, just to the east of Bathurst Street, was recently awarded to Public Work, a Toronto-based design studio. Public Work describes their approach to the design of the site where Garrison Creek once emptied into Lake Ontario as “A project that weaves together multiple narratives. Of geologic time, the ecology of the creek, the heritage of the fort, and the archaeological traces of the site that together uncovers the foundation of our city.”

Work also continues on various exhibit-related projects. A Parks Canada exhibit, which includes three interactive screens and one touch-table, was installed in the Centre Blockhouse earlier this summer, and the Black Powder exhibit in the Stone Magazine is now in place. After various capital improvements are completed in the Brick Magazine, the exhibit 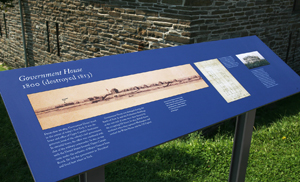 One of the dozen new interpretive signs installed recently is found in front of the Stone Magazine. Credit: Andrew StewartFinding the Fallen: The Battle of York Remembered, which was recently on display at the Market Gallery, will be installed in the building (Fife and Drum March 2012). Our first set of twelve exterior interpretive panels was installed in early September and a second set is currently being fabricated for locations outside the fort’s walls. These signs, which were designed by Leonard Wyma of Donderdag (who also designed our new Fort York wordmark), and fabricated by WSI Sign Systems Ltd./King Architectural, will add a new layer of interpretation to the entire site. 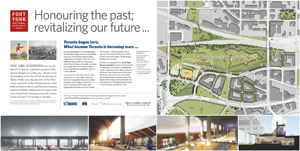 On 14 June, the City of Toronto and the Fort York Foundation announced that the W. Garfield Weston Foundation is making a $1 million gift to the Fort York Foundation to initiate the rehabilitation of Garrison Common. The Common, the open ground and park west of Fort York and part of the 43 acres comprising Fort York National Historic Site, contains an archaeological site, a military cemetery and forms part of the ground where the Battle of York was fought on 27 April, 1813. The Fort York Foundation is currently engaged in a $7-million capital campaign to obtain funds from the private sector to support the City’s ongoing invigoration of Fort York National Historic Site, which currently has commitments from City, Provincial and Federal governments totalling $19 million.

In his remarks at Fort York on 14 June, Geordie Dalglish, a director of the W. Garfield Weston Foundation, said: “We are very pleased to support this important heritage, environmental and city-building project. Fort York National Historic Site has played a central part in the history and evolution of our city and our province, and the W. Garfield Weston Foundation is proud to play a lead role in elevating the profile of this important asset in the Toronto cultural landscape to a widely diverse population of visitors, Canadian-born and newcomers alike”.

An interpretive panel showing the preliminary landscape plan will be displayed in Garrison Common, and at Fort York, while this rehabilitation work is underway, expected to occur in stages over the next few years.

The official launch of the Bicentennial of the War of 1812 has made for an extremely busy few weeks. On June 7 we hosted Toronto the Good, a gathering which brought to Fort York a broad cross-section of Torontonians with an interest in the City and in city building. On June 8 The Encampment opened on the first night of Luminato.

Commissioned in partnership with Luminato, it proved to be the great success we hoped when we first discussed the installation more than three years ago with artists Thom Sokoloski and Jenny-Anne McCowan (www.thomasandguinevere.com). Each evening between June 7 and 24, crowds of people visited The Encampment to experience the magic of 200 individually illuminated tents located within the fort’s walls. In the end there were more than 10,000 visitors. Anyone interested in ensuring that the stories associated with the War of 1812 and the potential of Fort York are understood and appreciated owes a huge thank-you to the 125 creative collaborators, scores of Fort York volunteers, and many others involved with the installation.

On June 14 the City of Toronto officially launched its War of 1812 Bicentennial Commemoration at Fort York. As part of the event it was announced that a lead legacy gift of $1 million from the W. Garfield Weston Foundation had been made to the Fort York Invigorated Capital Campaign (www.fortyorkfoundation.ca). The Foundation’s gift will be directed toward the rehabilitation of Garrison Common, which is part of the ongoing revitalization of the larger 43-acre national historic site. The event was attended by Andy Pringle, Chair of the Fort York Foundation fundraising cabinet; Geordie Dalglish, Director of The W. Garfield Weston Foundation; the Honourable Michael Chan, Ontario Minister of Tourism, Culture and Sport; the Honourable James Bartleman; elder Garry Sault of the Mississaugas of the New Credit First Nation; and the co-chairs of the City’s Bicentennial Steering Committee: Councillor Michael Thompson and Blake Goldring.

Free Bicentennial launch events continued over the June 15-16 weekend at Fort York with a variety of family-oriented programs, including music from Gin Lane, Morningstar River, Muddy York, the Barra MacNeils, the Metis Fiddler Quartet, and performances by the Fort York Regency Dancers, Lisa Odjig, Manifesto, and others. A special thank-you goes out to Alok Sharma, Supervisor of Special Events, for planning and producing the weekend, and to the staff and the 70 member Fort York Volunteer Team who pulled it off so successfully. While things were busy at the fort, various events were taking place as planned elsewhere across the City, including a special service at St. James’ Cathedral, a free open-air concert by the Toronto Symphony Orchestra at David Pecaut Square, and The Loyalists, a participatory theatre performance in Victoria Memorial Square produced by Single Thread Theatre Company. Worth noting is that after the Fort York Guard opened the TSO concert to loud applause, it was invited to participate in three TSO performances the following week.

On the actual anniversary of the Declaration of War, the Honourable James Moore, Minister of Canadian Heritage and Official Languages, formally launched the Federal Government’s War of 1812 Commemoration at Fort York. The event went well with Fort York as the backdrop, Councillor Paul Ainslie providing remarks on behalf of City Council, and the Fort York Guard figuring prominently.

After the launch, staff then moved into programming for National Aboriginal Day, in partnership with the Mississaugas of the New Credit First Nation, and Canada Day. After the July 4 Parler Fort, our next Bicentennial event will be held on July 14. ‘On Common Ground’ is a free festival that we hope will grow into an annual celebration. The event, which will be our formal launch of the Garrison Common as a new public space, opens at 3 pm and features Sarah 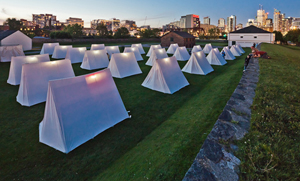 The Encampment, Photo by Tom RidoutHarmer (9 pm), Shad (7pm), The Rural Alberta Advantage (5:30 pm), and Alex Cuba (4 pm). We encourage everyone to come down with family, blanket, hat, and umbrella (i.e. rain or shine).

Although work on various capital projects continues, updates on these items will be left for the next issue. The one to note now is that the tender for the Visitor Centre construction is out and bids from the pre-qualified general contractors are expected to be submitted in July.